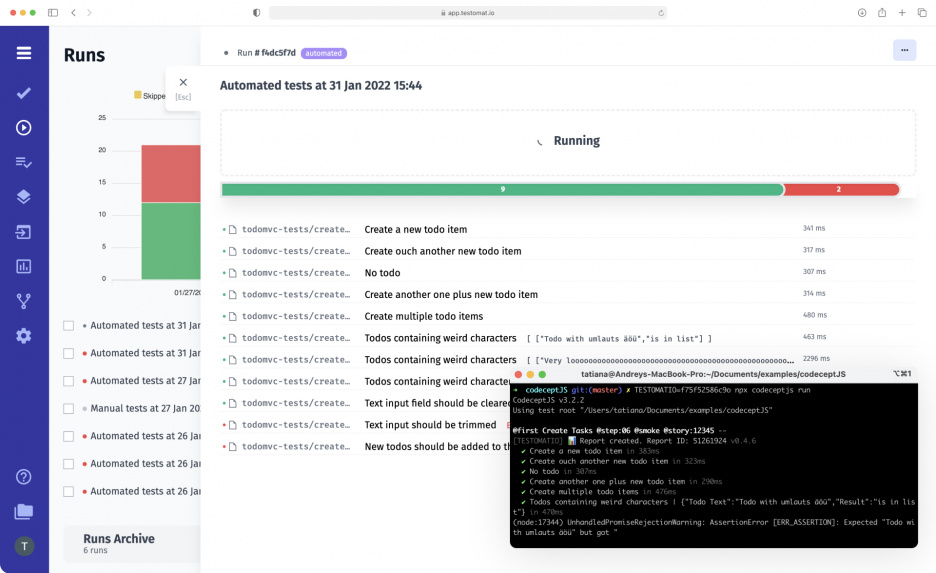 Test Management system testomat.io initially is designed as first-automation test management solution. So, it is the best possible home for your automated tests. You can track your automated test cases here, organize them into test runs, report results from test runs in real time and analyze the results of their executions. Moreover, you are able to keep manual test cases and synchronize them with automated scripts under one roof.

Importing automated tests in TCMS is a key functionality. Importer is based on built-in integrations. Importer is like a glue between TCMS and your automation framework. Due to this feature you can import automated tests from source code into a system per a few clicks and easily start your test automation management. All right, let’s look up, what wide capabilities importer supports:

Integrations with the following testing frameworks:

Import does not need any customization or additional extension. Just create project, inside testing project to start import find a button Import automated test cases. And the Import screen will appear. In drop-down menu pick testing framework you are using and type of testing framework. The type of your new project will influence the look of your interface, as well as its intended audience.

Next, just copy special generated command and paste them to cmd in a quene. You can monitor introspection of your code. Have many tests exist and have many ware imported in result. Check errors which might possible cause during import.

Be free operating variables during import:

Importing as a first step in structuring testing process

Let’s go talk about benefits of test management! And you understand why you need to import your tests.

The test management app is fully customizable, integrated with your existing tools and optimized for productivity.

An application that reads a test directory from the command line, iterates through the directory looking for tests and adds them to a test suite.