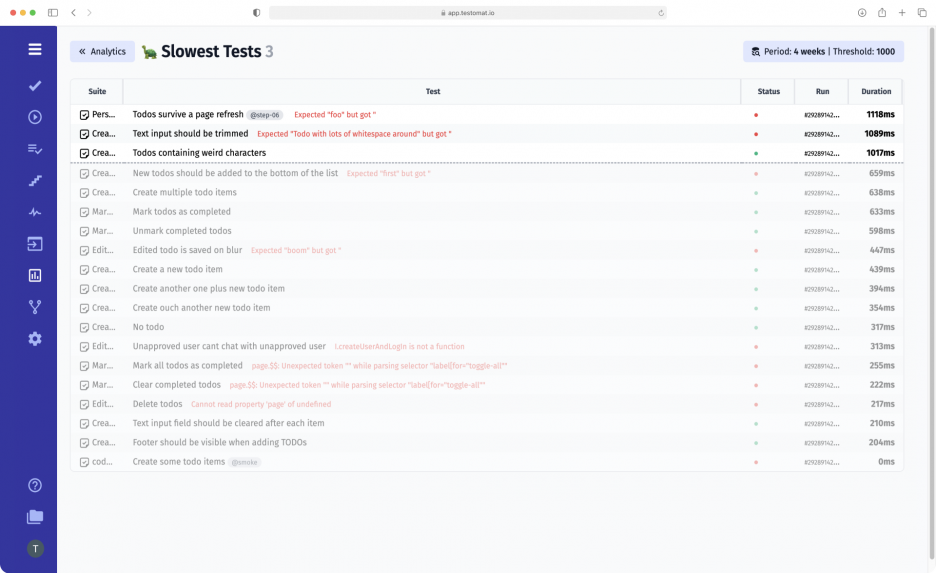 The testomat.io test management app supports the Slowest test detection. You can track slow tests on Analytics Dashboard through the Slowest Tests widget. The slowest Tests widget visualizes slow automated tests within a table. The report doesn’t work automatically. You should set your own testing time in settings.

But the main factor that influences the test execution duration is the complexity of flow determined by requirements needs. Automation tests that are too abstract or go through many steps can`t be fast.

Slow tests are frequently overloaded, attempting to accomplish too many tasks. By reducing the number of steps required for each test, the overall time for each test is reduced, and there is typically a synergistic impact. Performing numerous single-purpose tests may be faster than running a single overloaded test. As you can see, the time of tests is measured in nanoseconds or seconds.

How to decide which tests should be slow

Anyway, you have to define by your team collectively what slow and fast mean for you. e.g. a slow test starts from 3 seconds. You should measure test execution time explicitly in one of the time units. In the meantime, define what’s share of slow tests is allowed in your testing portfolio.

Why measure slow tests are important

Once you’ve discovered slow tests, go over each one and identify where the time is spent. With that information, you should be able to identify any hot spots and work on resolving them.

Information about the execution time of tests is helping a lot in the maintenance and refactoring of automated tests. You can track the performance of tests. It is a widely spread trouble when tests slow down week after week as a result limit testing delivery.

The main errors slow down your tests:

So, the faster your tests run, the more frequently they’ll be run, which is an important performance parameter. Using this widget and this test metrics determines whether they are application performance dips that can be improved or issues of automation framework to be resolved.