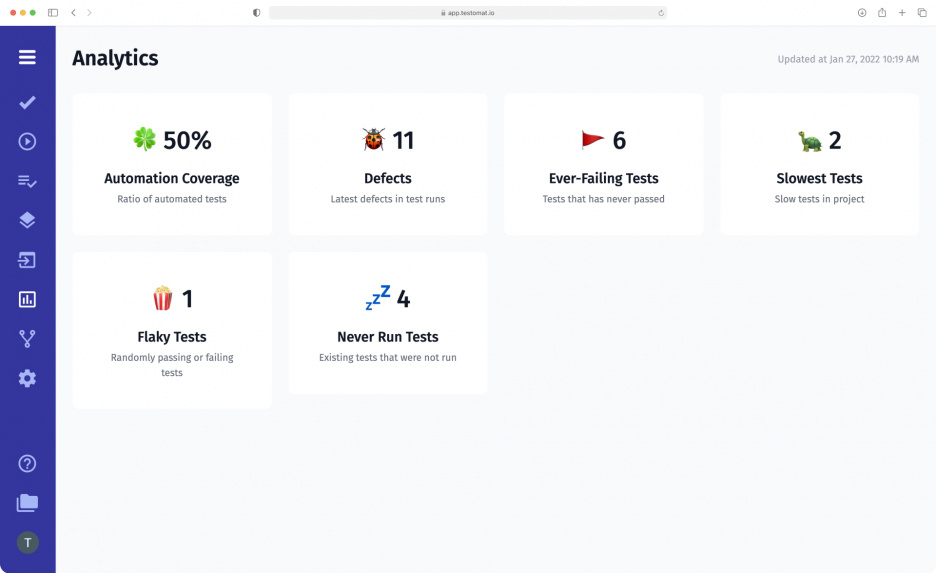 The testomat.io test management system provides failing test detection. You can track your Ever Failing Tests tests on Analytics Dashboard on the particular Ever Failing Tests widget per certain time period. Also, you are able to sort them by suite, statuses and executed date. You just need to carefully evaluate each test in this tab. More detail about this coming next 👇

Test to Fail vs Ever Failing Tests

During the software testing process, tests sometimes fail. That’s actually normal. When the test fails because of a problem with the software that you are testing, fixing issues that are discovered is the developers’ responsibility. And QA team should provide insights to developers that might allow them to resolve an issue faster.

If a problem is related to your test framework, before you will notify the developers that their code has a bug, you should make certain that the problem was not caused by an automated test that you wrote.

Ever-failing tests — are tests that aren’t fixed for a long time. So, the Ever Failing Test metric shows what tests are not fixed yet. And your QA team should fix them caught in a fast way.

causes of why tests aren’t fixed:

Why ever-failing tests are dangerous for your testing process?

Accumulation of a large number of failed tests is a big problem: when they’re not taken care of as soon as possible, the QA team will start taking them for granted. Ultimately, a growing backlog of failing tests slows down the CI\CD pipeline, over this the QA team will decide to leave them up to further releases and much worse delete them. It might cause the delivery of a low-quality product. As a result, the business might lose their faith in quality assurance.

That’s why it’s critical to have a testing tool reviewing your tests — and other violations detected in your code by this tool, like Flaky tests, Defects, Slowest tests and Never Run tests. Powerful testing tool able to ensure that these violations will be identified early.

However, at the same time, counts are how quickly and efficiently the QA team resolve these critical. Ensure that these violations are identified early.