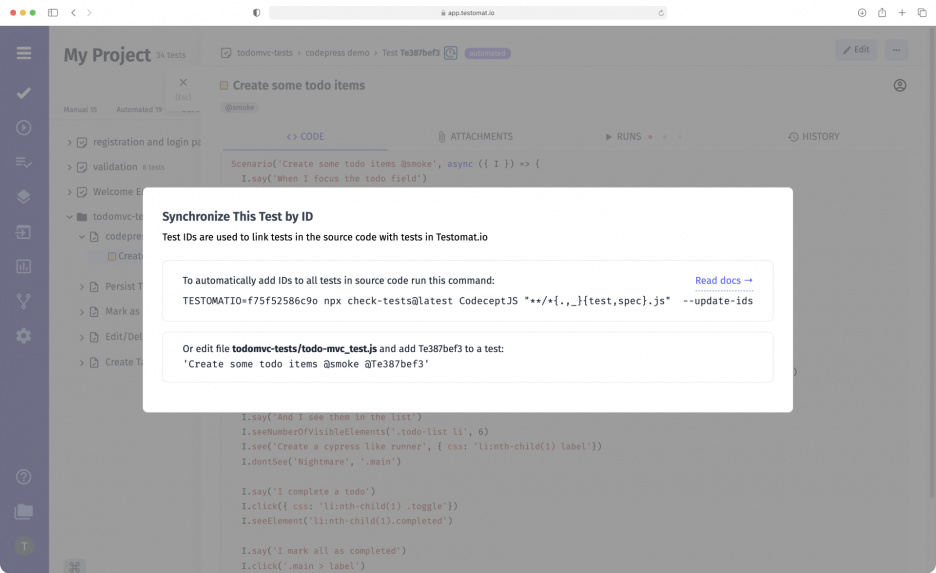 Synchronization automated tests by IDs functionality allows changes that occurred with tests in the test management system to correlate correctly with the code in the framework, for example, in Cucumber, but it might be any supported framework. IDs act as a kind of link between testomat.io and your framework.

Why is test synchronization necessary?

To start working with test management you need to import existing tests from your automated testing framework into the test management system. This is possible thanks to the Advanced test importer from the source code after creating the project, just with a few clicks in the terminal.

But after import, the project does not stand still. Test project might be changed: feature files, scripts, steps, implementation tests, and other essential test case components. To keep all the information up to date, you need to do synchronization. And to ensure that all the changes made correctly correlate with the core code, you need IDs, which will pass data about the correspondence of tests in the code and TСMS.

To this end, we developed the concept of identifiers. They are assigned in testomat.io to each test and suite and allow them to be equal to the code in the testing framework.

Testomat.io automatically assigns identifiers to all tests and suites. But they are not present in the project’s structure until you import them with an additional argument. To do this, go to the Import Automated Tests tab and select the Auto-assign IDs option. As a result of this query, all tests and suites IDs are imported into the project successfully.

There is also the inverse command that allows users to remove all previously assigned identifiers: -clean-ids- This option is relevant if you decide to continue working on the test project only in the framework, and it should no longer be synchronized with the test management system. When you use this command, you can delete IDs in the code; they will exist in testomat.io as long as the project exists.

Synchronizing autotests by ID is necessary for CI\CD to work correctly. Our TMS supports seamless integration with many CI\CD tools, enabling continuous testing and detailed reports of test results in real time and when they are completed. Thanks to Sync automated tests by identifiers (IDs) functionality, testomat.io can correctly display testing results in reports.

Another feature set related to Sync automated tests by IDs: