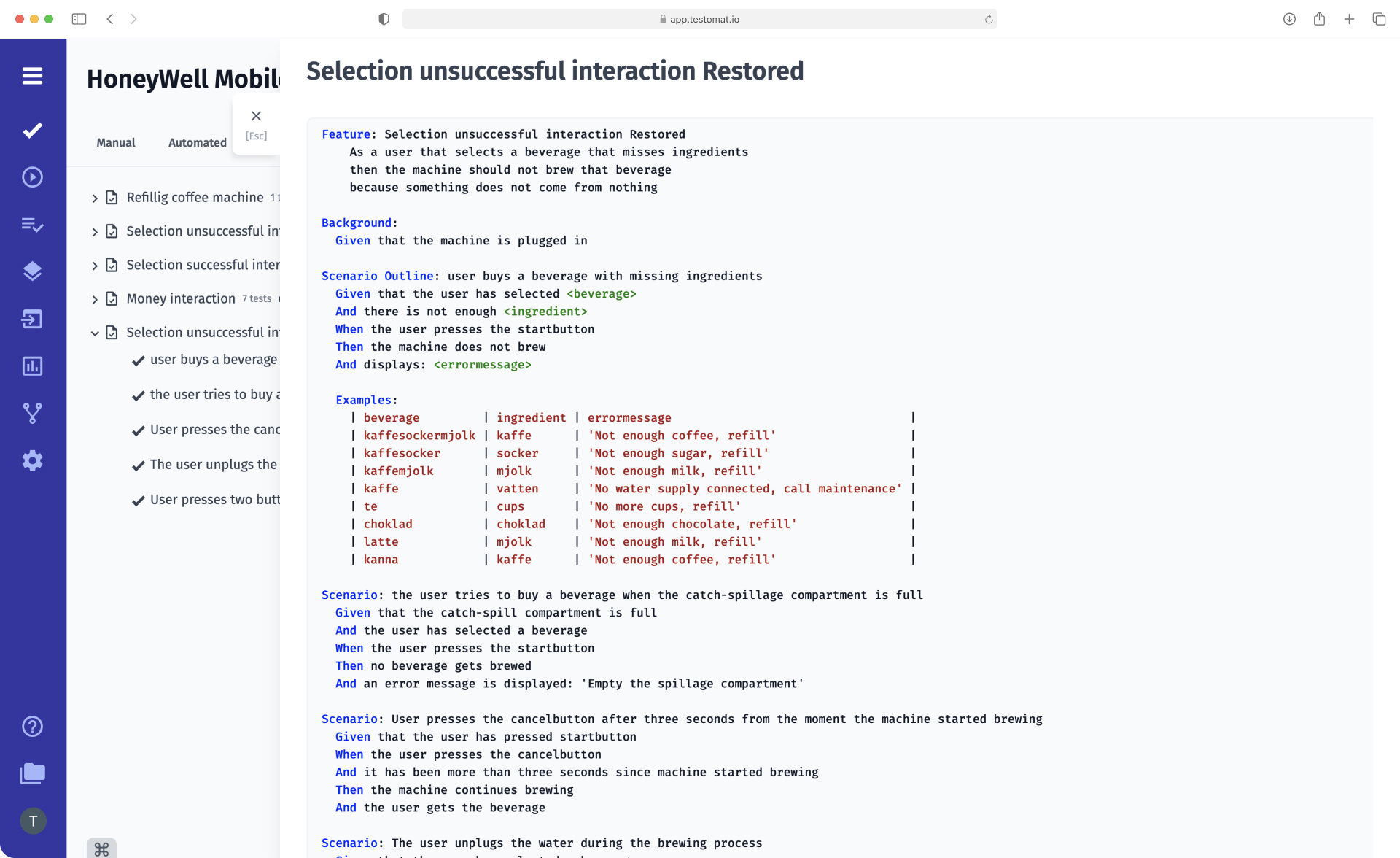 BDD scenarios are described in a special BDD language called Gherkin. Gherkin language serves two purposes: serving as project documentation and a pre-code for automated tests. Gherkin syntax is human-readable, so a person who doesn’t know any programming language can also write or maintain the behavior tests perfectly. This is a key value of the Behaviour Driven Development approach!

Note, the feature file is the main entry point of the BDD scenario context according to the testomat.io test management app architecture. Feature file conventionally should consists of a single feature.

Gherkin language is a line-oriented language, like the YAML programming language. Lines in Gherkin test scenarios start with a special keyword: Scenario, Given (initial condition), When, Then, And, But etc. Gherkin syntax uses indentation to define its structure and either spaces or tabs may be used for indentation. Line endings terminate statements (called steps).

What is the difference between Cucumber and gherkin language?

Gherkin is just a plain text language, Cucumber is a tool that is able to interpret and execute the test scripts written in Gherkin. For example, another testing framework that can interpret Gherkin – Behave. Behave is behaviour driven development tool for Python. RSpec position as BDD for Ruby.

What is test management Gherkin syntax support based on?

The Gherkin syntax support feature makes writing BDD scripts in the test management system possible thanks to the Advanced Gherkin editor.  Gherkin editor supports standard Gherkin scenarios in English. But we are exploring the support of other Gherkin localization in the near future. You may create BDD test cases with the Intelligent auto-completion service based on Database step definitions. Gherkin editor parser automatically analyzes and divides the input into Features, Scenarios and steps:

Let’s see how it works when we write BDD script manually:

What happens when we import automated BDD tests:

Thanks to the built-in analysis of the test management application, BDD tests synchronize during the import of automated tests. All BDD steps are added into Steps Database from your code. After then, you are free to re-use them by creating new test cases with the original auto-completion BDD support feature.

Gherkin keywords are highlighted in automated tests as well. Moreover, the Gherkin editor analyzes immediately every Gherkin keyword which is used in the code of the testing BDD framework. You are able to format BDD scenarios to the pretty view with one click – the test management system aligns all lines and makes the feature file easy to read. All previous versions of the script are also available in the History tab of the menu dashboard. Edit the Feature file if you need.